In the previous part, we have told about a single color LED Strips.

By manner of powering them, They can be complete static – with Fixed intensity and dimmed – with a regulated intensity.

We just need to select the LED tape and to calculate needed power.

Is it so simple?

How to choose the right Power Supply Source?

When you choose the LED Strip, you need to select a proper Powering Supply to ensure a many hours un-interruptable work of the product.

It is a Good practice to select 25% more powerful Power Source.

On the first sight, The Power consumption is 28.8 Watts. But, let we add a 25% more power, as practice needed an engineering reserve.

Different manufacturers of Power Supplies remark on their guidelines or user’s manual not to use at 100% of the possibilities of the source. The ideal percentage from the engineering’s point of view is about 75-80% the maximal value.

Here are some reasons for that.

– First reason: In a case of temperature degradation of components into the Power Supply source, the calculated its efficiency sinks below.

If We have PS with 95% efficiency on 25 degrees, at 85 degrees, the efficiency drop at 85%. That means the estimated 15% are generating the heat into the Powering Source. That will bring new losses into the Source, and this “the avalanche effect” and will destroy the device.

That is possible by using active devices named: Dimmers. The Dimmers are “MOS-FET Transistor” based switches, using the technique PWM (Pulse Width Modulation) situated between the LED strip leads and the connected Power Source.

With the different coefficient of dimming, we could produce 0 to 100 % regulation of the tape’s emitted light. The effect is named: Dimming. 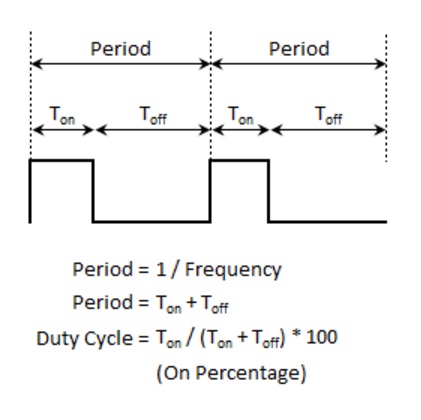 Now you know does the effect “Dimming ” means. Is It Cool?

There are some Hi-End, sky-gliding  devices with point by point  single color led controlling. In common case these LED strips are 5 V – to 12 V powered and need smart controller unit (Personal Computer) to dump “the show program into the action” .

Here is an example with APA102  tape. The 144 fully addressable LEDs/per meter.  See the pictures below.

In the next Part, we will try to explain a theory of multi-color LED Strips.