The Thematic of this tutorial is a visual describing a logical elements and gates, made by transistors.

Our main goal is to refine and explain with additional details the 3D tutorial topic and co-powering the Learn Tutorial.

Transistor: Device allowing the efficient electronic replacement of the mechanical switch or relay.

An example of usage: an Easier way for the MCU controlling the processes.

Into 3D schematics is inserted a resistor as load.

There is new element into the 3D Schematic – Electronic switch – a MOSFET Transistor. 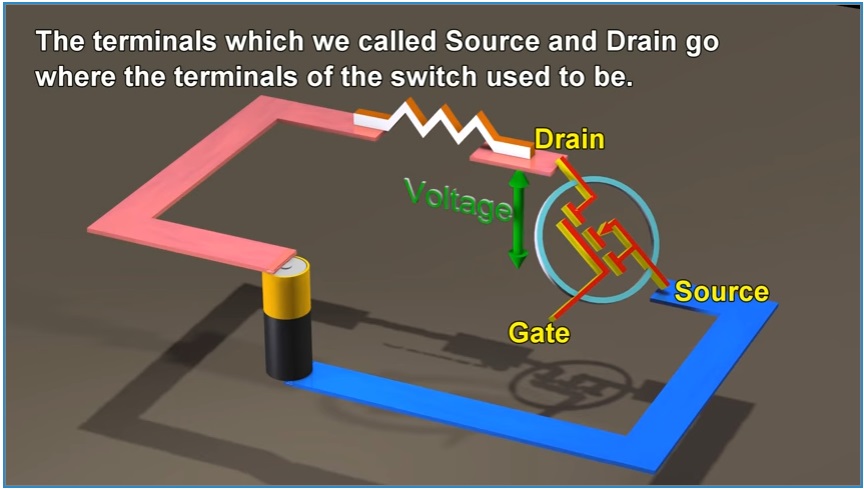 It has three leads:

The Source lead has the minus or neutral battery potential. The Drain is connected to Positive battery Pole via the current limiting resistor (representing the missing light Bulb).

In a few words, the common source schematic has an “inverting” function.

It works in the following way:  When the Voltage between the Source and gate leads reaches the one threshold level named: U Gate Threshold Voltage, the Internal semiconductor structure start to produce immediately (at the same moment, plus, on the practice some minimal delay of few nanoSeconds) conducting channel – allowing the current fo flow through the resistor.

If the controlling voltage is below the U Gate Threshold Voltage, there isn’t flowing the current trough the resistor, respectively through the load.

Let we See: With applying the control voltage, we are manipulating the output current – That is the main MOSFET (Metal Oxide Semiconductor Field Effect Transistor) purpose –  The only differences are into the scale of managed powers.

As we already said the Transistor has the Inverting Circuit functionality. – See the “Truth Table” – the table, which represents how the input or inputs will act to the output state.

Dual Input ‘NOR’ circuit, made by two inverting transistor stages, affecting on common resistor – the schematic is known as “Wired NOR”.

See the dual gate ‘NOR’ symbolic, also try to understand the “Truth Table”.

Let’s add an additional inverter on output. There was thus obtained the dual gate ‘OR’ Circuit. See its logic symbol.

The 3D Lesson is continuing with dual gate ‘AND’ circuitry, and, also try to understand the “Truth Table”.

3D Video Tutorial continues, showing the Logical elements, used in pulse technic and an automation. The animation will help you to understand the principles. 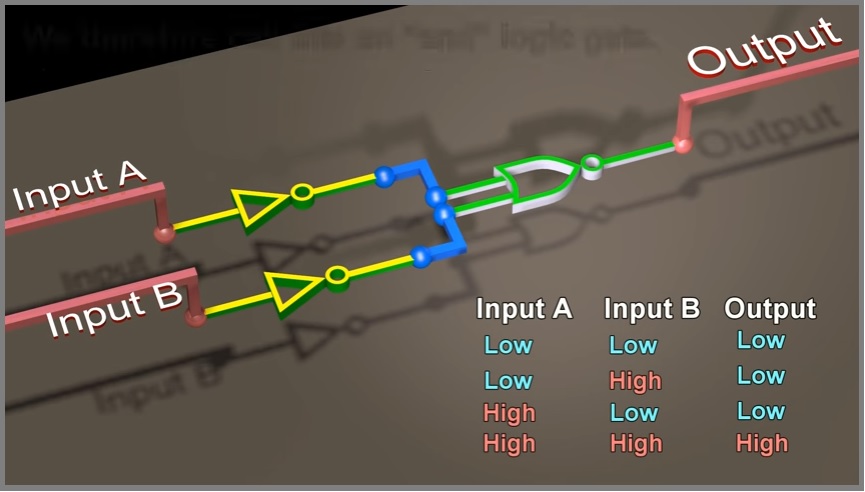 { Special Thanks to the VIDEO Author: Eugene Khutoryansky }