Now Trending:
Home
RF Powered MCU
Microcontroller Runs on Radio Waves and can be reprogrammed in the RF field.

Students & Engineers Develop microcontroller runs on radio waves, can be reprogrammed in the RF field

A research initiative between a University of Washington team and TU-Delft in the Netherlands has created a microprocessor that can power itself through stray radio waves and receive programmable updates in the same fashion. While the CPU in question is exceedingly weak by modern standards (it’s a RISC-derived 16-bit microcontroller clocked at just 16MHz), it’s an order of magnitude more powerful than any other device that’s powered by ambient energy in the environment with no battery required. This has significant implications for Internet of Things development and for ambient computing as a whole.

There are several aspects to this breakthrough, which we’ll discuss below. First, there’s the device, known as the WISP5 (Wireless Identification and Sensing Platform) itself. The WISP project grew out of an Intel Labs project nearly 10 years ago. One of the critical problems with building a programmable device that can survive off ambient energy is the amount of power required for read/write operations.

The latest iteration of the Texas Instruments MSP430FR5969 offers a solution. This particular chip uses 64KB of FRAM (Ferroelectric RAM) to store data along with 2KB of conventional DRAM. The 64KB of FRAM is critically important because FRAM’s power consumption when writing data is less than 100x than the NAND that earlier WISP devices used. 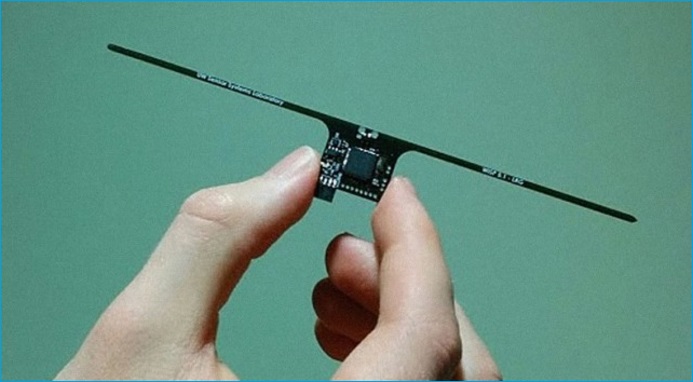 Next, there’s the question of creating a method for actually communicating with and updating the microprocessor. The TU-Delft research team noted that while a great deal of work has gone into improving Computational RFID upstream communication between the tag and its reader, no serious work had been done on how to best implement downstream communications between the read device and its tag. That makes sense given the way RFID has typically been deployed, but remember the ability to reprogram these devices on the fly is a critical component of the project.

“We propose Wisent—a robust downstream communication protocol for CRFIDs that operates on top of the legacy UHF RFID communication protocol: EPC C1G2. The novelty of Wisent is its ability to adaptively change the frame length sent by the reader, based on the length throttling mechanism, to minimize the transfer times at varying channel conditions. We present an implementation of Wisent for the WISP 5 and an off-the-shelf RFID reader. Our experiments show that Wisent allows transfer up to 16 times faster than a baseline, non-adaptive shortest frame case, i.e. single word length, at sub-meter distance. As a case study, we show how Wisent enables wireless CRFID reprogramming, demonstrating the world’s first wirelessly reprogrammable (software defined) CRFID.”

Video 1.  Battery Free Computers Become Wirelessly Reprogrammable
One of the major challenges the TU-Delft team solved was how to send data to a device that may only be powered for brief periods of time — remember, the entire point of WISP5 is that it runs on ambient power. This is where the use of FRAM is critical — because FRAM writes extremely quickly and requires 100x less energy per bit than NVRAM, the chip can power up, write data, lose power, and continue again when power is again available. Obviously, distance still matters; the team only tested ranges of 20-60cm.

Ambient sensors and the Internet of Things

On the one hand, the Internet of Things has mostly been a snoozefest to date, with limited consumer excitement for Fitbits and other fitness trackers and not much else. Ambient sensors like the WISP5 have limited capabilities, but they’re still much more powerful than previous ambient devices — and while 64KB of RAM isn’t much by modern standards, it’s roomy enough for low-level sensors.

Sensors outfitted with this capability could track temperature or accelerometer data over time and transmit those results during periodic check-ins with a tag reader. They could be used to detect whether buildings were damaged in earthquakes, used as battery-free implant devices for monitoring patient health, and could possibly be used by the agricultural industry for monitoring plant health over time.

What’s interesting about the WISP 5 is that you’ve got research on multiple areas of technology coming together to modify old standards and create new ones to drive the use of computing devices in areas where they were previously infeasible. This is the type of “More than Moore” innovation that the silicon industry believes will drive the advance of technology long after Moore’s Law has ceased to scale, and it’s critical for firms like Intel looking for markets they can adapt and specialize in over the next five, 10, and 20 years.