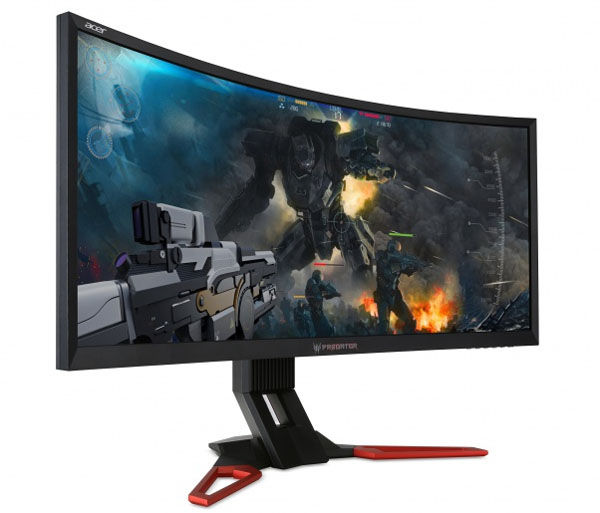 It seemed as if gaming monitors had reached a plateau when G-Sync and Free-Sync came along. Adaptive-refresh technology is a big step forward in video processing that brings smooth motion and tear-free gaming to more users than just those with expensive video cards. We thought manufacturer’s efforts to increase refresh rates might relax a bit. Well, it looks like we were wrong.

Recently, it was tested Asus’ latest ROG Swift, the PG279Q. Not only does it deliver a superb image courtesy of an IPS panel and Nvidia G-Sync, it tops out at 165Hz supporting adaptive refresh to that maximum. With every feature a gamer could ask for, it earned Awards.

And now, we’re looking at the new Acer Predator Z35. It combines the stunning panel of the XR3501 and the full feature set of the PG279Q in one package. And it raises the speed bar to 200Hz.

Those who have browsed the specs certainly noticed the 2560×1080 pixel resolution. That’s something we weren’t thrilled to see in the XR3501 either but after testing and playing games on it for a while, the lower pixel density became a non-issue. We continue to maintain that contrast is the most important factor in image quality, not resolution. And the Z35 is no different.

You’ll see in the contrast tests that it has an even greater dynamic range than the BenQ. Kudos to Acer’s engineers for coaxing greater performance from the same AU Optronics panel part. Light output and color accuracy are about the same as the XR but the Z35 adds G-Sync and a 200Hz max refresh rate.

The panel’s native rate is the same 144Hz but an overclock option in the OSD lets the user up to the max to as much as 200Hz. There is no guarantee of stability from Acer. The company’s website suggests lowering the rate if problems occur. We, however, had no such issue. Our sample ran at 200Hz all day without even so much as a coil whine.

In addition to G-Sync, you also get ULMB with a 100-step variable pulse width. We found that to be very effective in the improvement of motion detail and resolution. The only caveat is you’ll have to up the brightness control because light output is reduced by almost half at the least aggressive setting.

On paper, the Z35 sounds nearly perfect. Some will decry its 1080-pixel vertical resolution but stick with us and definitely check one out for yourself. The image is stunning and smooth for sure.