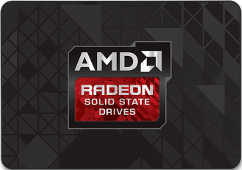 RADEON™
R7 SERIES
The Ultimate Mass Storage for your Gaming Desktop or portable Notebook PC.
Get a new level of performance and revel in a storage experience second to none with superior gaming and application performance. Using “cutting-edge SSD technology” designed with enthusiasts in mind, the Radeon ™ R7 Series SSD-s meets the demands of gamers and graphics-hungry power users for fast system boot-ups, insane speeds, and scorching fast load times. Now there is finally a storage solution to match the rest of your high-end system components for an unmatched gaming and multimedia experience.